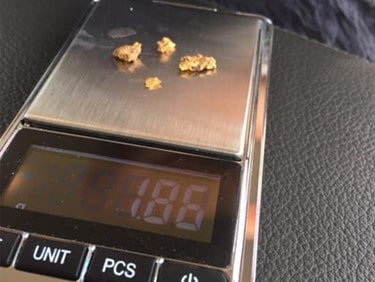 Saturday morning rolled along and the better half suggested “how about we drop the kids at the grandparents and head up to Maryborough for a detecting session and spend the night out the bush for Valentines Day”……. How could I refuse that offer!

So we packed the camper trailer, dropped the kids at the grandparents and got to Maryborough about 3.30pm on the Saturday afternoon.

Previous to this about 8 months ago we had both done the training course at Coiltek in Maryborough and since then I had bought a GPX4500 from them and had been using the 15”x12” Mono Commander coil and had done over 100hrs and had not found a single piece of gold!

Beginning to wonder what I was doing wrong I decided to drop into Coiltek to see Mick and asked if they had a 14” Coiltek Elite Mono I could try for the afternoon and the next morning as I had heard good things about them. Like usual Mick was a great help and we also hired an SDC for my wife to use.

Well, this is where it starts. We pulled up at likely looking spot so my wife could work the old diggings and I could work my way up a nice gentle slope with lots of small ironstone and quartz on the surface.

I removed my Commander coil and put the 14” Elite on and after about 2 hours of using the coil I picked up a nice signal and I couldn’t believe it, about 6 inches down I got my first nugget at 0.91 grams. WOW, what a feeling and something I had been waiting for!

Another hour went past and thought I better start heading back to the car to set up the camper trailer, stepped onto the track (not a graded track just one a few cars have been driving on between trees) and had walked about 3 mtrs when I got my second nugget about 5 inches deep in the track! It went 0.59 grams. Couldn’t believe it, had done over one hundred hours for nothing then 2 in 2 hours!

Set out again in the morning now excited and confident to work the track and the area I had found the 2 nuggets the previous evening and found another tiny one at 0.1 gram about 2 inches from surface and another on the edge of the track that was 0.26 grams.

So in the space of around 7 hours of using a coil I had never used before I had found 4 nuggets totaling 1.86 grams with the 14” Elite!

I now know what is my favorite coil and is next on my wish list!

Thanks to the guys at Coiltek