Happiness Found in the Echunga Goldfields

I had a recent prospecting trip out East from Kalgoorlie with a friend that had never been detecting before. We spent 5 days detecting and two days traveling.

I was using a Minelab GPX5000 with a Coiltek 14 x 9 Elite coil. I have used this combination for about two years. My friend was using a borrowed Minelab 2300 with standard coil. On day one I detected into an area near an old timer’s gold shaft. The area had been dry blown by previous tenement owners for 30m below the shaft and there was a lot of rubbish around.

70m downhill from the shaft was a gully. There were three campfires within 35m of the gully and plenty of dig holes around. This gully was also right next to the main track which ran through the mining area, so I was not expecting much! After detecting downhill into the gully, a small creek developed. I detected into the creek and was straight onto the usual junk targets. This was an annoying start, so I switched to detecting the side walls of the creek and soon found my first couple of small gold nuggets which were light but clear signals. Both at around 20cm deep.

As I worked further down the creek bank, I hit intermittent small gold nuggets and I soon found myself concentrating on a 1m section of the bank. I found about 12 nuggets in a 1 metre long strip by 50cm wide by 30cm deep hole that I gradually scraped out as I got new signals. The biggest nugget from the hole was a 7.5 grammer at 30cm.

I radioed my mate to come down and join in with the 2300 and he picked up a couple of small nuggets nearby, then it seemed to dry up. While my mate searched further down the creek, I widened my search area also. I soon got a good "down noise" about 3m away from my 1m hole on the opposite creek bank which turned out to be a nice 12-gram flat piece buried about 35cm down.

Sometime later I found a 7 grammer buried about 30cm down, 20m away from the main cluster. My mate now wondering why I was finding bigger slugs and he wasn't checked the 7 grammer before it was dug out and found 2300 didn’t register a signal even on the highest setting! I worked back toward the 1m hole area and I scraped a few more inches off the surface either side of the existing hole and soon found there was more nuggets buried further down. I ended up with around 20 nuggets from the hole on day one. The hole was extended slightly more at that stage, mainly in depth.

I located some nuggets in the creek nearby and I knew my friend had been over the area with the 2300. Thinking he must have missed them I called him over to make sure he was detecting low and slow and discovered the 2300 could not hear the signals I had left in the ground to show him. These were smaller nuggets around 20cm down to 25cm deep.

During the next few days, we ran several comparisons between the 2300 and the GPX with the 14 x 9 Coiltek Elite on various nuggets still buried. I also compared another of my old favourite coils, the Coiltek Joey which has always been a good small gold finder for me. I also went over the patch area with other coils from well-known brands. I could not find a single nugget that the 14 x 9 Elite had left behind.

After getting all the obvious nuggets from that patch I spent three days wandering on the quad bike trying to find new ground. I located 5 different areas with nuggets ranging from a single nugget to nine nuggets, but my mind kept wandering back to the 1m hole that I pulled 20 nuggets out of.

I decided there must be more nuggets in that hole or close by. The mass of flies and heat was not great for digging but I knew if I wanted a chance to increase my nugget tally I needed to get stuck into it. With the last day of detecting looming I returned to the 1m hole with a bigger pick in hand and hacked away. The hole was expanded in width and depth and the nugget count continued upward.

The hole ended up about 2.5m long, 60cm to 80cm deep and 80cm wide. I believe 62 nuggets came out of that hole and for some strange reason I named it the "50 nugget hole". There were so many nuggets in a proximity I often dug what I thought was one signal and threw several other nuggets onto the spoil heap in the process.

While I was working on the 50 nugget hole my mate discovered a new patch just behind our camp on a quartz area of about an acre. It had clearly been detected before with lots of holes. I visited his patch for an hour one morning and found three small nuggets. My mate found about 30 small nuggets in this patch over a few days with the 2300. They were all shallow less than 10cm. My mate was very happy with his first trip out and after seeing my combination at work he is now saving for a GPX5000 and Elite coil. 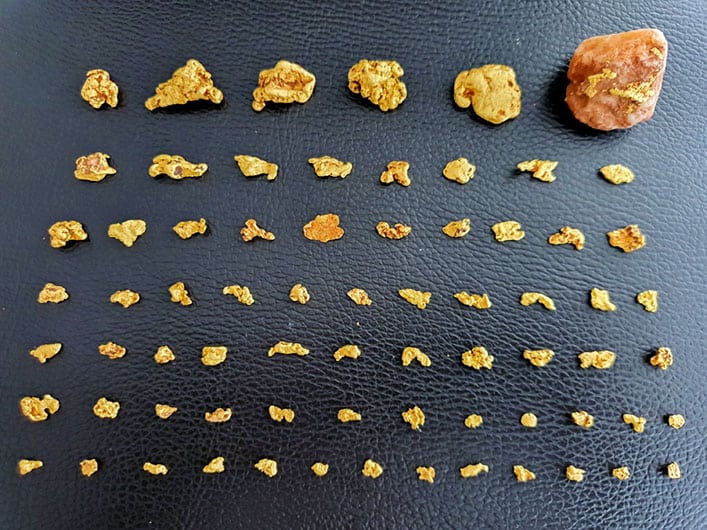 I am not affiliated with any coil or detector company and I've owned nearly every coil there is from various manufacturers. In my opinion the Coiltek Elite range of coils has been the biggest leap in improvement the GPX series of detectors has seen in recent times.

I believe why I am pulling out more nuggets from patches that have been done by others is because the 14 x 9 Elite is very sensitive and powerful for the first 30cm in depth compared to other coils. The 14 x 9 Elite is my favourite all-rounder. It is what I use 95% of the time. It has a reasonable size for searching but because of the narrower width still provides better sensitivity compared to bigger coils. In short it will find smaller targets deeper.

I have not mentioned the settings I use on the GPX. I use a standard pre-set setting. A setting that I am surprised is not often mentioned. I am not big on weird and wonderful setting combinations or excess gain that people often use. Proper form, consistency and concentration is more important.

On this trip I ended up with 71 nuggets which ended up adding to 2.3 ounces of gold within five days detecting.

I will be looking to get a 9-inch round Coiltek Elite in the future. I can imagine that will be even more sensitive on small gold at depth. I cannot wait to test one.

Keep up the good work Coiltek!