Perseverance Is The Key 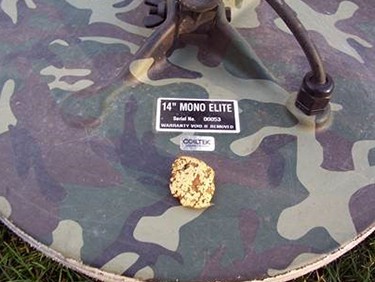 Last week two mates and I had the chance to test run the new Minelab Monster machine and also do some detecting. Bill had the monster, Peter had the SDC2300 and I had the 5000 with my trusty 14” Coiltek Elite.

Because I was keen to see how the ‘monster’ would go in ground that was littered with rubbish, bits of tin nails etc. we first went to some diggings that I know that are exactly like that. After a couple of hours getting used to the settings and practicing, plus all of us detecting we stopped for a bite to eat and a drink to assess the results. We then decided to go to an area that has been surfaced for more testing/detecting and while there I picked up a small .2g with the 14” Elite and the monster grabbed another small nugget (not sure of the weight.)

Next we decided to go to a gully that was well known for small but plentiful gold in shallow ground and this is when lady luck showed her hand. At first I thought it was bad luck because as we arrived at the gully it was apparent that there was a detecting group or club camped on the spot with vehicles in all directions. What shall we do now was the question but Peter reminded me of good spot further down the end of this track, and he was right because about 1 kilometer further on is a well-known gully which was to be our final destination for the day. This is a really interesting gully with gold on a surfaced hill then gold at different depths down the slopes and finally gold in the gully at the bottom with shafts varying in depths from a few feet to several feet deep. In parts it has also been worked with a bulldozer as is evidenced by the tracks, but there is plenty of ground untouched by the bulldozer.

So we then deployed with the monster working the surfaced hill, the 2300 working the shallower ground and I took the 5000 with the 14” Elite to the shafts in the gully. In the first few minutes I picked up a .5g on a bulldozed section as I was crossing to the area of the shafts and then for about another hour there was nothing other than the occasional shotgun pellet or bullet etc. so I turned to my favourite search method. I say favourite because it has been very productive in the past but it can be hard work.

The method is working the inside of the holes, which has to be done with care, so working out the depth is very important and the aim is to find holes of about 3ft to 4ft deep. The deeper shafts are nearly always in the deeper ground and are more apparent by the size of the mullock heaps. The hard work comes in because most holes have some rubbish in them such as tin cans which can drown out other signals and all holes have fallen branches, sticks and leaf litter which has to be removed to get to targets.

As time wore on I was getting tired (I’m an old git of 78) and was just thinking of packing it in for the day when I got a double signal from a hole that was only about 4ft deep. One large signal at the bottom was confusing the other signal so I set to work clearing out the bottom of the hole and then got rid of the rusty culprit of that signal. The other signal which was in the side of the hole was now clearer and with a bit of a warble, which in many instances you can get from gold (or iron). I cleared all the soft soil away down to a hard surface and the signal was still there, so started to dig and that’s when I realised it was in virgin ground right by the hole. That ground was the hardest ground I have ever had to dig and I’ve been detecting over 30years. I was swinging the pick from over my head as hard as I could and it was only penetrating about an inch each time so I started coming in from the top, but same result. After about half an hour I had dug down about a foot but because the ground was so hard I had only made a hole about a foot in diameter so was having great trouble trying to pin point as the 14” would not fit. By this time I was really tired as inch by inch the ground grudgingly opened up, so I called up Bill and asked him to bring the monster down to pinpoint. While waiting I noticed some clay on the pick which meant I’d got through the hard layer so I gave a few more desperate whacks and suddenly it was out. After locating the target I finally felt the weight in my hand and my hopes rose but I’ve learned to not get too excited as it could easily be lead or iron although because of the ground I knew it had a good chance of being gold.

Bill was now nearby and called out “is it gold” but I wasn’t sure because it was so dirty and stained plus my eyes are not the best. So there I am staring and rubbing this piece but could not see any gold and then I realised that even though I was in shade I still had my sunglasses on, (what an idiot), and as soon as I removed them I saw the unmistakable colour which became clearer with a bit of spit and polish. Obviously it was about an ounce so then the yelling and the dancing started. Tired?  Not anymore! Back to the ute, onto the scales 37.2grams, very very satisfying and the part that lady luck played? Well, if the detecting club had not been up at the other gully we would not have been in this gully. That was lucky in my book.